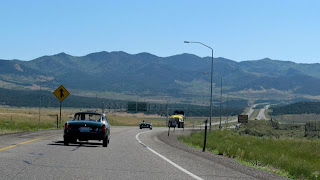 Day three started out with a 22 mile drive up
I-15 to the junction of I-70, and the turn to the east.
We made it to the junction just fine, but this Pontiac Solstace that blurred past us didn't make it much further before gaining an audience with

Utah's finest! Despite the jurisprudence, the Solstace passed us again later! We caught it at a scenic overlook. The troopers went easy on them, writing the ticket for 88 in a 75 MPH zone, which kept them under +15! 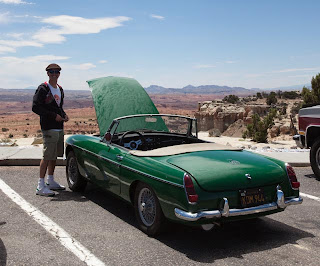 Oh, Before I forget, the good news is that Kristian got his problems with his fuel tank worked out late last evening in Mesquite and caught up to us overnight in Beaver! Had his tank "cleansed out", a 4 lbs pressure aftermarket fuel pump installed, and even had a broken weld repaired on his exhaust system before the Mesquite auto shop put him on the road about 10 pm last night! Good to have him with us, and his '63 roadster is running very well again! 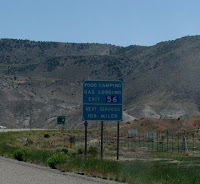 We found plenty of hot weather again today, but navigated that 110 mile stretch from Salina to Green River with no issues. We found plenty of scenic turnouts, even within that longest stretch of the U.S. Interstate Highway system with no services. Click the photo to the left and you will be able to read the sign. Here are some samples of what we found. Video to follow at a later date. 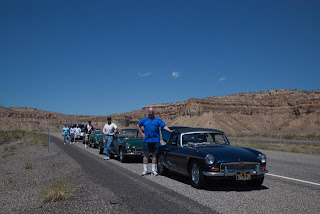 During that long stretch we came upon a bad accident with a 25 ft Silver Stream on its side across the eastbound lanes. The Utah State Troopers had traffic slowed to an idle past the accident scene,, the only rest area we had seen was closed, and we had not seen any scenic turnouts. So just over the next rise we pulled off on the shoulder among some spendorous landscape, stretched our legs, and took this photo. 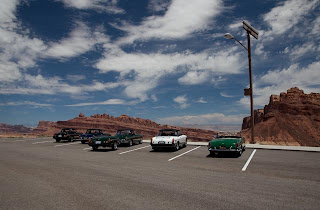 Shortly Afterwards we did find scenic turnouts, including this one. It was difficult to get anyone in the photographs at his turnout as all were busy snapping pictures from all directions.

By the way, most of these photos are larger images. Just left-click any of them to enlarge!
Here is my favorite view from that vantage point. This one was taken with a 21 megapixel SLR and should be suitable for framing! 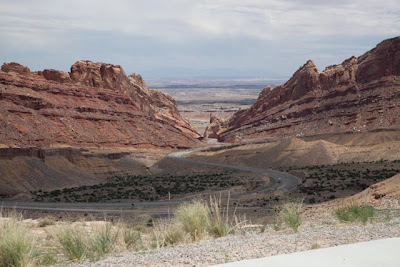 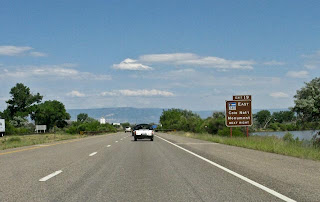 About 40 or 50 miles later we crossed the Colorado state line near Fruita and saw the entry point we will take tomorrow for the self-guided Gateway Tour from the west through the Colorado National Monument and the orchards and wineries just south of Grand Junction.

This evening we met LaVerne, a fellow member with Steve Gardner and I from http://www.mgexperience.net/. The whole group of us had dinner and a great time! And LaVerne snuck out just a few minutes early, but not without paying the bill! Thanks from all of us LaVerne! I'll try to get a photo of the dinner posted. I did not have my camera at the time but others did!
Posted by MGBJockey at 5:37 PM