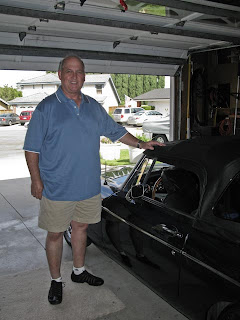 Well, the day has arrived. At 9:30am on the button Steve Gardner, President of the Southern California MG Club called to confirm the contingent from Pasadena was about to embark. The distance from Pasadena and from Irvine is about the same at 70 miles, so we should hit the rendezvous point at Hesperia about the same time. 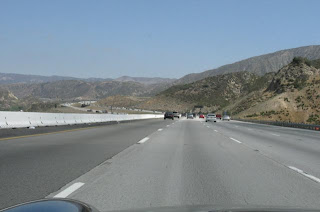 I left from my home in Irvine and met Steve near Hesperia, at the start of the high desert, just above the Cajon pass, elevation 4,100 ft. The rest of the group had continued to Barstow, near the outlet malls. Guess with the chase car, a Chevy Suburban, they had room for anything they bought! I was packed full. 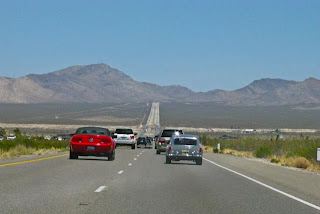 The drive through the desert was mostly uneventful. We were blessed that the weather moderated. The temperature when we passed the Baker summit was only 91 degrees. My temp gauge stayed within a reasonable distance above Normal, even on the long uphill grades. It did fine until we hit the off ramp at the state line. Traffic was backed up on the ramp and it took us about 10 minutes of creeping along before we cleared the traffic and pulled into the Primm Valley Resort and Casino. My gauge creeped up to just shy of the H mark. As soon as we stopped at the casino drive through I checked the temp with an infrared gun and the highest reading was 217 degrees. That should be well below my boiling point with 50/50 coolant mix, a 10 lb pressure radiator cap, and around 3,000 ft of elevation. 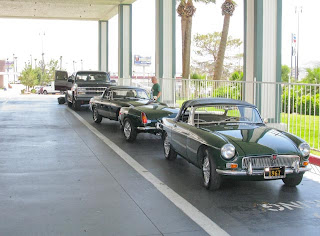 Steve and I arrived about 2:00. The rest of the contingent arrived about an hour later. One additional member left from yet another location and should arrive around 4:30 after experiencing minor fuel pump problems. Another member will leave the L.A. area very early tomorrow morning and hopes to join us here in time to depart with us for Day Two. We will try for a group picture tomorrow morning.
Posted by MGBJockey at 4:14 PM