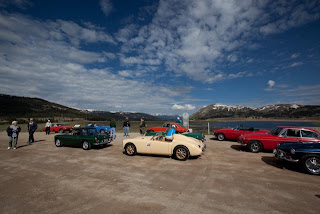 The Silver Dollar Tour & Kingdom Come Tour were organized like a scavenger hunt. An essential part of the tour was a contest seeking the answers to a series of questions in context to the stops on the tour. Both shared the same route to the town of Leadville. From there they split into two tours with the Kingdom Come and Gone Tour being a full day. My group opted for the four hour Silver Dollar Tour. The scenery during the 125 mile circuit was absolutely stunning, and quite diverse, ranging from snow capped peaks rising above towns surrounded by forests, to colorful stratified rocky cliff faces, to rushing white water streams, to lush green livestock pastures in the high valleys as evidenced in the following two videos. Each is about two minutes in length. 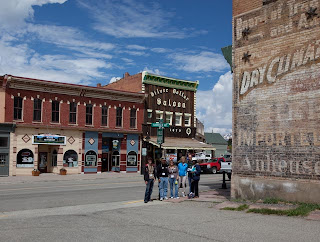 The MG Car Club Rocky Mountain Centre did a great job of setting a tour that was both fun for these cars, and informative about the history and culture of the area. We found a stark contrast between two mining towns on the tour. Leadville has transformed itself from a mining town to a quaint picturesque village well stocked with art and antique shops, throwback saloons, barber shops and photo studions, as well as local coffee shops and a creamery. The views of the Rockies from Leadville are stunningly beautiful and the townsfolk were keenly interested in all the little British sports cars. We spent over two hours drinking coffee and browsing the shops.

Red Cliff, Colorado, on the other hand is a well preserved mining town. So well preserved I felt like I was 50 years or more back through a time warp. That throwback era was represented well by most of the buildings, dwellings, 80% dirt & gravel streets (including the main drag) and the true to life demographic nature of the townsfolk. Modern cars and machinery were present in places and some modern construction appears to be finally in process. The town does already have one old-styled but otherwise modern lodge and tavern. The townsfolk seemed bewildered by all the strange cars and may not have recognized what we were all about. One even shouted a question to one of our drivers, who declined to stop for lemonade from a kids stand, "then why are you here?"

From Red Cliff we passed under a fascinating high arched metal bridge, which we later climbed and crossed on our drive to another well kept valley town named Minturn. From there we wound our way back to I-70 just below Vail. We stopped for lunch in Vail Village, then once again made the grueling climb over the 11,000 ft. Vail Pass before completing our run back to Breckenridge.

The Silver Dollar Tour afforded me another 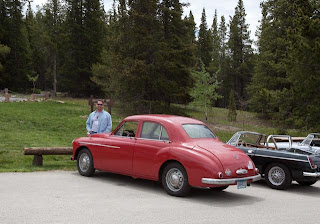 opportunity today, that of meeting world renown
Lucus distributor and ignition system master Jeff Schlemmer, along with his very well maintained 1958 MG Magnette. I am running a distributor I got from Jeff a couple of years ago, with an ignition curve matched to my engine, exhaust and carburators. 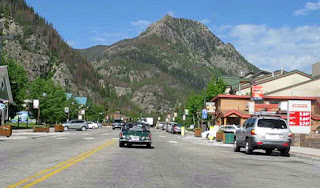 This evenings activity was the Backyard BBQ & Music Fest in the neighboring town of Frisco, seen in this street photo. This was the first opportunity for most of the MG 2009 participants from all across the country to gather in a large organized social setting. It was pleasing to see many of my online friends as well as the staff of the North American MGB Register (NAMGBR). The BBQ was at Backcountry Brewery & BBQ and the staff did an excellent 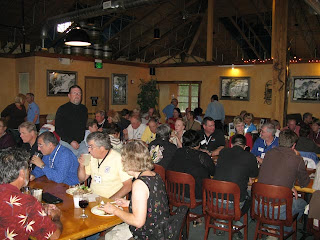 job of servicing the large group. The food and beer were both excellent. Light rains came at the end of the BBQ. I could hear the music starting from the other end of main street, but with the rain I decided to head back to Beaver Run Resort to create this blog post, and to get more sleep. I was working until 1:00 am this morning on getting that first video up on the blog, and was up at 6:30 to get ready for the tour.
Posted by MGBJockey at 6:57 PM