Day Two! The Heat is On! and Breathtaking Views! 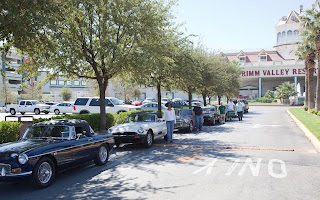 Day two started slowly. One in our party was not able to tolerate the smoky casino hotel climate, which I can richly appreciate with my chronic dry cough. I loath that environment, which is why I have never taken my wife Beth to Atlantic City or Las Vegas (we lived in southern New Jersey for 13 years). And we also heard on the news that traffic was snarled in Las Vegas due to a nasty rush hour accident and a road construction project. We bided our time with a leisurely breakfast, gassed up our MGs, posed for a group photo, and set out on our way a bit deeper into the heat of the day than we had planned. Kristian joined us at Primm, seemingly having overcome his fuel pump problems.

We made it through Vegas with unanticipated ease. The most interesting site may have been the billboard with the Union Jack.


We headed on north toward that small corner of Arizona we'd have to clear before entering Utah. About 60 miles out of Vegas Kristian's fuel system went south again. We spent about two hours roadside in the very hot desert, about 20 miles out of Mesquite, NV, doing our best to help him. He had already gained experience in "encouraging" the fuel pump with blows from a hammer, but we finally determined his fuel tank was the source of the 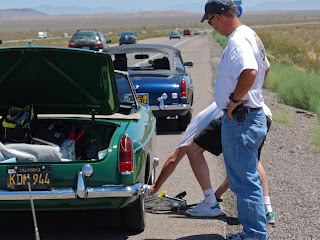 problem and he used his excellent Haggarty benefits for the tow into Mesquite. 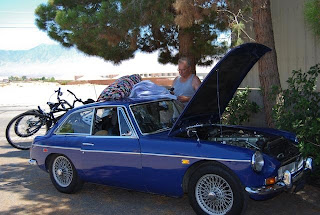 While we were roadside, we were joined briefly by our other member, Nick, who left L.A. early this morning in his MGC-GT with his grandson. He headed on up the road wishing to cover more miles than our planned route. When we arrived in Mesquite we found him stopped, his hood up with an electrical or ignition problem, and a local auto tech already helping him. The young tech was not familiar with MGs. We provided a couple of basic diagnostic tips and Tim was quickly on his way with a new battery. We left Kristain in Mesquite in the hands of a local shop. We are hopeful that a good flush of his fuel tank and a new fuel pump will get him on his way to catch up with us.

The heat was one story of the day, and now safely in Beaver, Utah, at around 6,500 ft. we are certainly clear of the grueling hot temperatures until a week from now when we head home. 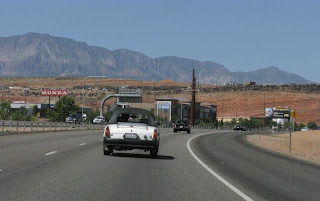 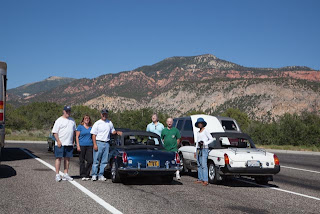 The other story of the day, at least for me personally, was the splendor of the drive. There was a breathtakingly beautiful descent from the point of Kristian's breakdown down into Mesquite. I had no idea it was coming, not having traveled this route before, but I started a video capture with a windshield mounted digital camera at just the right time and hope to gain enough knowledge on how to edit it and later add it to this post in the blog. I captured additional video on the incredible scenery during the canyon descent and climb into St George, and later past Cedar City when we broke into the high plains with its contrasting greenery.
After dinner tonight we heard from Kris. The shop was just about to finish work on his car and had it running reliably. At the moment they were repairing a weld to his exhaust system that he had no idea had cracked. Great for us owners to proudly work on these LBCs like we do, but perhaps good to get them on a lift to get a better look occasionally.
Posted by MGBJockey at 6:04 PM