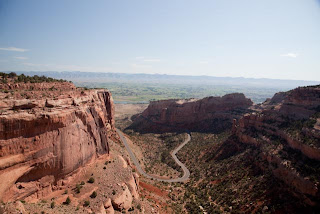 This day started with our group back tracking west from Grand Junction to Fruita to take in the Gateway from the West Tour evidenced by this spectacular photograph from the first vista we stopped at. The tour was put together by Randy Rex and promoted by LaVerne Downey. The Southern California MG Club would like to thank both of them again for enriching our trip. The tour was a wonderful experience! Please watch the seven minute video of the first segment leading to the vista where the photo was taken. This is the first video that I finally got uploaded tonight, but am still in a steep learning curve so there is no music bed or anything. You just get to hear the drive at this point! You may be able to hear my high revving to clear the plugs as we pulled away. I was sputtering something aweful, likely due to the altitude and the fact that we were idling in line for quite some time at the gatehouse and the engines got pretty hot! You will also hear a lever on the windshield camera mount rattling in the breeze. Guess I need to wrap it with a rubber band. You will hear me warn a cyclist who turned his head a bit too far as the first MGs passed and almost veered right over in front of me!

We were joined by Wayne and Dee Johnson and their Magnette from the San Diego MG Club, of which I am also a member. I also had the fortune to meet and share this experience with DB Wood of Bend, Oregon, a fellow active participant on http://www.mgexperience.net/. We also met Bob, an MGB GT owner originally from Missouri and now from I believe Glenwood, Calif., and his father John from St. Louis. John had flown to California to join Bob and the two of them had driven fourteen hours to get to Fruita for the Gateway from the West Tour.
Our drive from Grand Junction to Breckenridge was mostly uneventful. Today from my windshield mounted camera I concentrated on taking two-to-five minute video clips instead of still photographs. Got my first one up! At least that's some success. I will try to get more uploaded in the next few days.
Speaking of climbs, the Vail pass, at almost 11,000 ft tested us and we each spent some 4,400 rpm time in third gear, but we all made it to the crest and it seemed downhill from there. We were also greeted with a brief thundershower just as we entered Breckenridge, causing us to stop and raise our tops and zip down windows.
Breckenridge lives up to its billing, and the Beaver Run Resort is quite the place as well. We were able to check into the resort quickly, and check in with MG 2009 was also quite efficient. During check in I was able to meet another friend from MG Experience, Paul Hanley, of Chestertown, MD.
Several of us took advantage of the free car wash area, and later our whole SoCal group had dinner together. 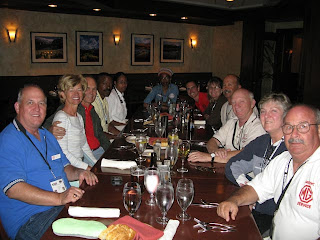 I am not sure how much I will add to the blog during MG2009 as my first priority now that I am here is to enjoy the event and take in as much as I can!
Posted by MGBJockey at 9:48 PM