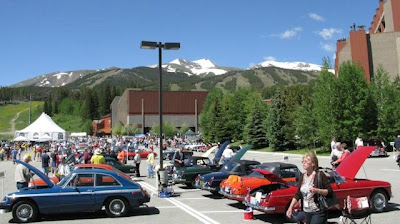 Breckenridge and the Beaver Run resort certainly provided a breathtaking backdrop for today's Peak 9 Car Show and Concours. As is traditional the car show is held the final day of the event. Many different classes were recognized with approximately 300 entries. This view shows only a fraction of the entries. Plaques were awarded for first, second, and third in each class. Classes for MGBs were organized by vintage, or range of year models. Classes were also organized for the earlier MG T-Series cars, MG Midgets, other MGs such as the Magnette coupes like the one owned by Jeff Schlemmer shown in an earlier post in this blog, and even a class for other British cars (non-MGs). 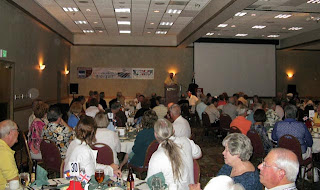 Awards were announced at the wrap up banquet by Bob Gloyd of the MG Car Club Rocky Mountain Centre. The MG Club RMC did an outstanding job organizing and hosting this year’s event and I would like to thank each of them for their efforts and success. Thank you very much! It certainly made this journey worthwhile!

The Southern California MG Club was richly rewarded for this journey to MG 2009. Each member of our journey was recognized with the Road Warrior certificate presented to each participant who drove their MG over 1,000 miles to get to Breckenridge. My MG Experience friend Paul Hanley, of Chestertown, MD, won the award for the participant driving the greatest number of miles to get to this year’s event! I believe approximately 3,000 miles. 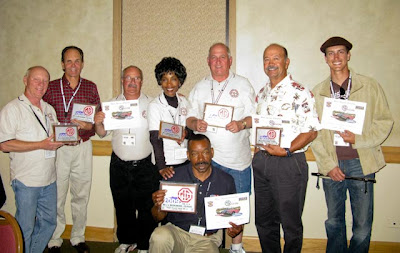 Here left to right are the national-level awards won by our club members:

Kneeling in front is Elvin Davis, First Place, MGB Mark IV Late Edition. (Elvin is from Detroit and is the brother of our member Zelda)

Now we pack up and will head for home tomorrow morning, reversing the route of our journey!
Posted by MGBJockey at 3:29 PM